Waldoboro Library of the Month Artist.

Featured artist at Key Bank on Commerical Street, Portland, Maine for the month of December 2011.

Shop on Peaks on the grounds of Greenwood Garden will be open during the holidays.

I am having a show at GEM ART GALLERY, Peaks Island, Maine

The Gallery at Diamond Cove

Artist sets up easel in the town and sells painting at evening auction at Waldoboro, Maine. Proceeds to The Medomak Valley Community Foundation.

Last Saturday of each month

Open Studio, 136 Island Avenue, Peaks Island, Maine
Directions: Walking uphill from the Ferry Landing, take the very first left. Studio is in the tenth structure down, from that left turn. 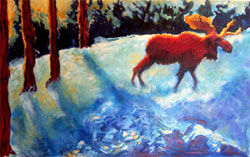 "Visions of the Contemporary American Landscape" curated by Patrick Shoemaker

Contributed a painting to this fund-raiser and celebration.